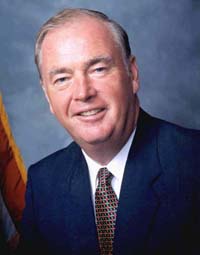 Alaska has a long history of trying to develop a natural gas pipeline dating back to the 1970s. The Administration and the Alaska Gasline Development Corporation have made significant progress toward building LNG relationships, with the potential to be providing gas to Alaskans and exporting LNG around 2024. What can we do in the meantime to enhance our revenues, plan for future projects, and prepare for a time in the near future when a project to transport Alaska North Slope gas to market is economically feasible?

A lifelong Alaskan born in Ketchikan in 1933, Frank Murkowski was elected to the U.S. Senate 1980 where he served Alaska for 22 years. He served on the Energy & Natural Resources (Chairman 1995- 2001), Veterans’ Affairs (Chairman 1985-1987), Finance, and Indian Affairs committees. Murkowski was elected governor of Alaska in 2002. As governor, he focused on revitalizing the state’s economy through resource development and on strengthening the education and public safety systems. He is also a long-time leader in the fight against substance abuse. In 2016, Commonwealth North awarded him with the Walter J. Hickel Award for Distinguished Public Policy Leadership.