Join us Wednesday at 5:00pm for the second in a series of Wednesday evening programs with Alaskan authors on topics ranging from the 150th anniversary of the Alaska purchase to space exploration at the Anchorage Museum Chugach Gallery (4th floor). 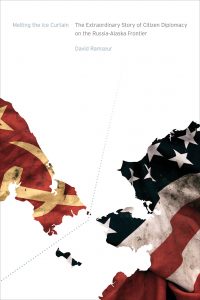 Melting the Ice Curtain tells the story of how inspiration, courage, and persistence by citizen-diplomats bridged a widening gap in superpower relations. David Ramseur was a first-hand witness to the danger and political intrigue, having flown on that first Friendship Flight, and having spent thirty years behind the scenes with some of Alaska’s highest officials. As Alaska celebrates the 150th anniversary of its purchase, and as diplomatic ties with Russia become perilous, Melting the Ice Curtain shows that history might hold the best lessons for restoring diplomacy between nuclear neighbors.

Melting the Ice Curtain: The Extraordinary Story of Citizen Diplomacy on the Russia-Alaska Frontier.