Join us tonight at 5:30pm for the first in a series of Wednesday evening programs with Alaskan authors on topics ranging from the 150th anniversary of the Alaska purchase to space exploration at the Anchorage Museum Chugach Gallery (4th floor).

Mike will bring us an engaging tour of his two books celebrating Alaska’s sesquicentennial, “The Man Who Sold Alaska” and, “The Man Who Bought Alaska”. 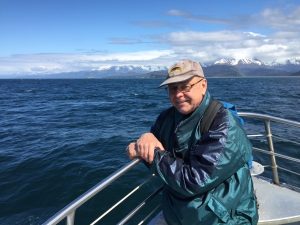 The Man Who Sold Alaska: Tsar Alexander II of Russia

Tonight, we welcome Alaskan Author, Mike Dunham. A native of Pampa, Texas, Mike lived as a small child in the western Alaska Native village of Quinhagak in the 1950s where he saw elders said to have been born when the territory was part of the Russian Empire. He is a graduate of Anchorage West High School.

Mike is the author of several entries in “Frommer’s Guide to Alaska” and has been a contributor to the BBC, Opera, Orion and Reason Magazines. He is the co-editor of Osahito Miyaoka’s “A Grammar of Central Yupik.”